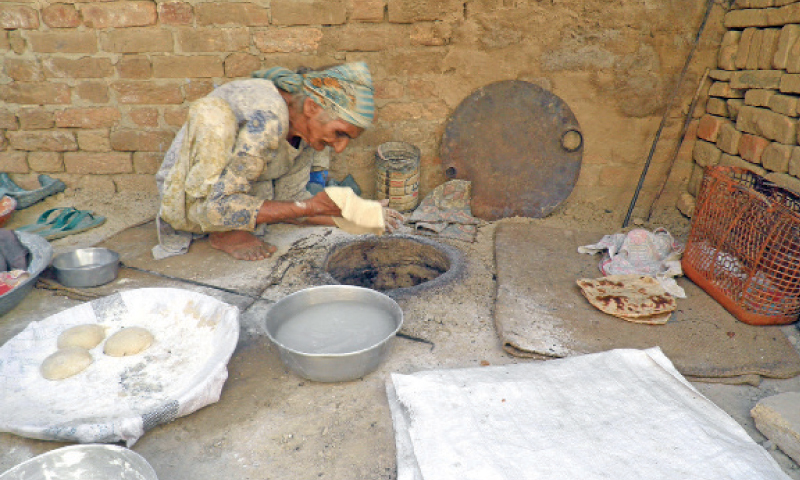 Men and Women from all walks of life, politicians, businessmen and ordinary people, queu in to eat the freshly baked tandoori roti (bread) made by Siftian Bibi or “Phuppi Siftian” as known to people in and around the city of Chakwal, Pakistan.

She was young when her husband died forcing her to become the breadwinner for her family. “I didn’t just have to take care of myself but also feed my two orphaned nieces who had been left in my care after the death of my brother some years earlier,” she said. “Like most other women, I had been baking chapattis (bread) at home. I decided to use this skill and installed a tandoor (oven).”

“At that time I was young and energetic and used to be able to bake more than 2,000 chapattis a day which earned me enough money to get by,” she says smiling as she recounts forgotten memories.

In the beginning Siftian Bibi, a young woman in a patriarchal society, faced many problems. “Some male customers used to harass me, making me burst into tears,” she recalls.

“After my husband died I resolved to never be dependent on a man again, so I never let any man seduce me. They say no woman can live without the support of a man but I proved them wrong,” she says, her face glowing with pride.

Years over the tandoor earned her enough money to build a house where she now lives with her niece. Her daily interactions with male customers made her confident enough to handle their advances through humor. Today she entertains her customers with Punjabi proverbs and sometimes even swears at them.

Siftian is now in her late seventies. Her eyes have lost their sight and she can no longer stand straight. She remains in the watchful eyes of the drug addicts in the area who steal from her whenever they find an opportunity.

“My whole life has been spent at this tandoor. Now I have only one wish and that is to die while walking on my own legs as dependence on others is the worst thing,” she maintains.

I have mad respect for Siftian Bibi, a woman who bravely carved out her own livelihood over charity in spite of societal hurdles and stereotypes. Her life is an exemplary proof how adverse conditions can and will bring out the inner strength in us if we only have faith. I hope her courageous character remains a symbol of dignity, hope and respect for women of Pakistan and everywhere else for years to come. These are true heroes of our community who go unnoticed in the eye of the public. But they could care less for they know their real reward lies in the Hereafter!

One thought on “An Unrecognized Hero”